North Reading is one of 13 communities using the Ipswich River watershed as the source for all or a large portion of their water supply. The river supplies more that 330,000 people in these 13 cities and towns, with 25 to 30 million gallons per day being withdrawn for water supply year round.  The volume withdrawn in the summer months can be more than twice this year round volume, with most of the increase due to lawn watering across the region.

Map of the Ipswich River Watershed

In addition to water supply, the Ipswich River also serves many additional important roles.  It serves as habitat to a wide variety of plant and animal life in the river and its tributaries, along the banks and in the wetlands that the river supports.  It provides numerous active and passive recreational opportunities - such as hiking and walking, canoeing and kayaking, and fishing and bird watching - to the residents of the watershed.  The waters also provide water for fire safety, as well as to golf courses, farms and industries in the watershed.
Since 2000, the Ipswich River has experienced both the highest flows and the lowest flows ever recorded at the flow gauge maintained by the United States Geologic Survey (USGS) in South Middleton.  The watershed is highly developed, with the forests and fields being replaced by parking lots, roads, roofs and other impervious surfaces.  Rainfall that once made its way into the ground to slowly recharge the aquifer is now collected and piped directly to the river and its tributaries.  The result of this development is the higher "high" flows and the lower "low" flows.

Most of us are familiar with the extreme high flow conditions in the watershed because we directly experience the results of the high flows.  In both May of 2006 and April of 2007, flooding along the river, Martins Brook and other tributaries did extensive property damage to homes, businesses and the Town's roads, parks and other infrastructure.  Residents had to evacuate their homes, and streets were closed as impassible due to the flood waters.  There was much talk of this being the fourth "hundred year storm" in the past decade.

The following pictures, provided by the Martins Pond Association, show the results of the flooding in May of 2006. 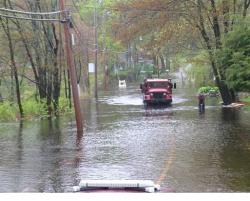 Flooding at the Gazebo in Ipswich River Park 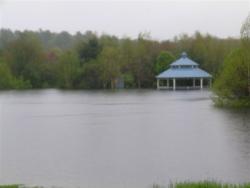 Less obvious is the other end of the flow regime - the low flow condition - and most of us are unaware when the river is in a low flow stage.  The Ipswich River has been listed as one of the 20 most stressed rivers in the country as the result of the low flow conditions periodically experienced in the river.  In the upper reaches of the river, between Reading and North Reading, the river frequently runs dry during the summer months, resulting in the loss of numerous fish and other species dependent on the river.

The photos below, provided by the Ipswich River Watershed Association, show the river bed between North Reading and Reading during a recent drought.  The “river” had become a series of segregated pools, where the surviving fish had gathered to try to survive. 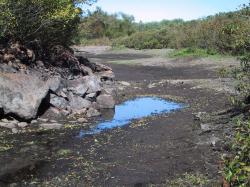 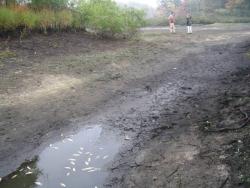 The extreme low flow conditions experienced in the river are the result of a combination of factors.  During the summer months, evaporation and the uptake of water by plants is at the highest rate of the year.  This "evapotranspiration" combines with the increased demands of water supplies and the diminished recharge of the aquifer to make the summer months the annual period of lowest flows in the river.  When a year of below normal summer rainfall occurs, the river can quickly see the flows drop to the point where the river is no longer a viable habitat for some species.

The graph shown below, taken from the USGS web site, demonstrates how quickly the flows in the Ipswich River can change from a high flow condition to a low flow condition.  This graph shows the period from April through July of 2007.  In mid April, the flow in the river was close to 700 cubic feet per second (cfs) in South Middleton, and the river was flooding its banks.  By late July, the flow had decreased to about 4 cfs – a drop of more than 99% in three months! 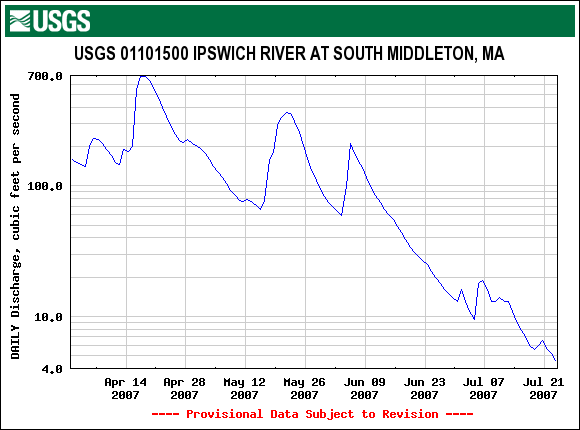 The information contained in the links below, developed by the Massachusetts Executive Office of Environmental Affairs, provides information on smart water use that will not only help reduce the impact your water use has on the Ipswich River, but can help lower your water bill as well!